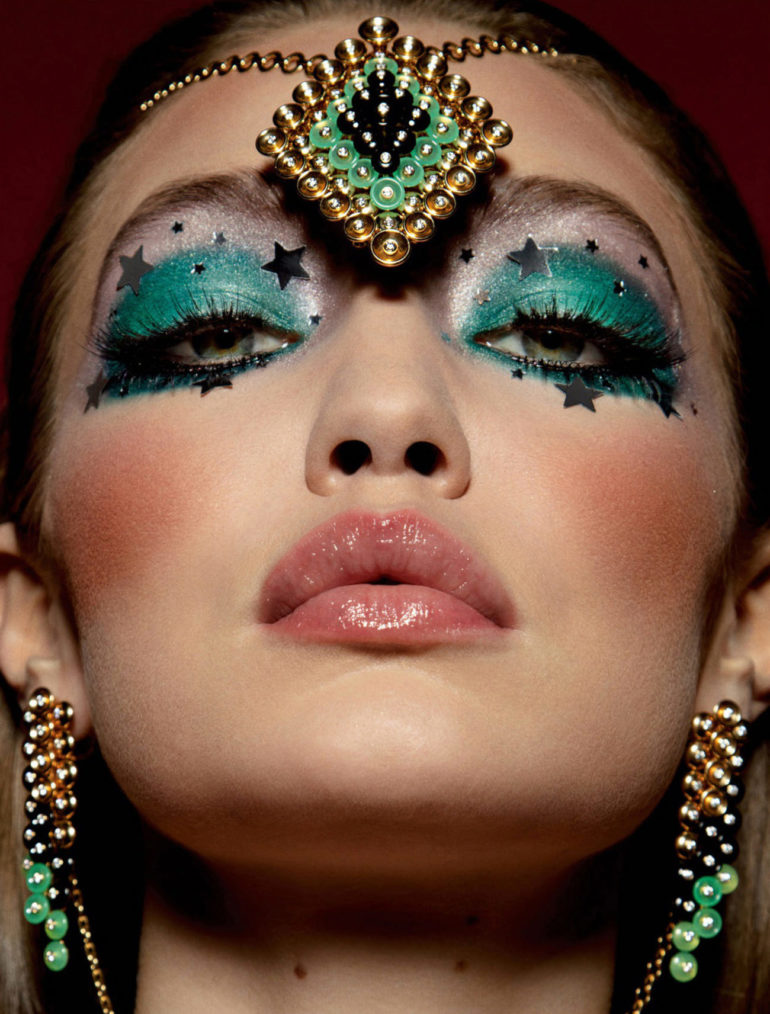 Gigi Hadid, Rianne van Rompaey, Bella Hadid & Vaughan Ollier ask What if We Were to Dream in ‘Et Si On Rêvait?’ by Inez & Vinoodh for Vogue Paris, May/June 2020. A palate of pretty a face we can’t forget. This story asks that we forgo the idea of average in an effort to fly. If only for a moment. Take my hand and we will soar high above the plateau. To gain perspective. Emmanuelle Alt dares to dream, and at this time I can’t think of anything more potent. We don’t need to be teased or told all is well. Instead we ask for a brief break. This Pandemic is Real. Nothing will change that. Art can lift you. It can take you away. Not in an effort to hide the eyes, but to open them even wider. Art is a great Equalizer. A truth teller that asks only that we bare ours back. Editor-n-Chief, Emmanuelle Alt, shares her editorial instincts “In this interlude of instability, where anxiety is heightened and the unknown is king, we are reassured by the familiar. This edition of Vogue Paris celebrates, more now than ever, what we know and love: fashion and dreaming.”

These images leave me breathless. This is an exquisite layout. I’m usually overwrought with my need to succeed in finding the right verbiage. Struggling to do a story justice. To do my ego justice. Here, however, there is no need. This is what success looks like. This is poetic perfection. The trio of Inez, Vinoodh & Alt have uncovered something really unexpected. In the middle of the worst outbreak of our lifetime, they’ve managed to take us to a place where passion and pain can coexist. It’s as if you’ve given our creativity the right to come alive again. You’ve cracked the window and we can feel the cool breeze. Art is a sentimental prospect. It’s unapologetic in it’s surge for satisfaction. It doesn’t feed on our pain or dwell in our darkness. Rather, it exposes the deepest part of our beings. That which moves us… moves the world. Truth is transparent.

Gigi looks through the eyes of the night with silver stars that make things right. Fulvia Farolfi captures a sense of wonder and awe in this mystical tale. There’s an undeniable connection met within the walls of each image. These women have turned a corner in their creative capabilities. Voluminous fashions are filled with elements of fantasy, as each shot is backed by blank walls lit with color. Sounds simple, yet each one comes alive with pride. The beauty of humanity is found, allowing raw emotion to flood every page. Bella brings to the stage a fearsome stare, with beauty so electric let the viewers beware. Like a gypsy dancer full of grace fall into her eyes as you sense her embrace. Fulvia uses the landscape of Rianne’s face, by filling every inch with a hypnotic hue. A metallic mist gives the paint a more palatable presentation, as each stripe appears like skin. In the height of the divine this era marked all that was fine. Decked out in Gold Lamé she is pure decadence. Wearing a Pucci headscarf gives her a dose of the decade. Appearing to inhabit the vibe, she captures the scene with a look that screams 70’s supreme. The raw embers of life and all it’s follies are felt in the flurry of raw gemstones worn over their skin. These pieces aren’t your typical fashion fare. They are a mix of mild stones and rock hard pieces. I see each one of these exquisite images like precious gemstones. On the one hand they are cohesive pieces, all presenting exceedingly well. On the other, they’re wildly savage, with the independent spirit of the open road. Finding your inner fire when forced to stay stagnant. This is a powerful story about movement found in the time of stillness.

Rianne wears an exotic mask of magenta feathers as her piercing blue eyes invite us to fly. Bella follows the fantasy as Farfoli has drawn flowers that fall over her face and down her neck. Vaughan presents in pink, as her powerful side profile is marked by cheeks that blend into the backdrop. Isolated images take a dramatic turn, as Inez & Vinoodh turn the element of loneliness around. They say the mark of great imagery rests in the idea that truth never ends. Motion is caught in a moment but the mind’s eye extends the visual experience. Clicking the camera at just the right moment, each shot seems to tempt the limits of still photography. Limbs seem to extend past the point of no return. Giving this editorial a multi-dimensional effect. Bold colors rise to the occasion as dresses billow out with breathtaking effect. These four, fearsome females play well together while obviously being shot individually. But, I would be remiss if I didn’t call out Gigi’s performance. She brings an emotional connection I haven’t yet seen from her. Making this, in my estimation, the most successful editorial she’s done to date. The lilting pout of her eyes plays to the downturn aspect of her mouth. Sending a message that simultaneously expresses sadness and strength. In this we witness a woman coming into her own. There is something very special about that reality happening at this time. I don’t know when this was shot, but it’s clear that your energy had shifted as your body is preparing to bare the beauty of life. Congratulations Gigi,you wear it well! 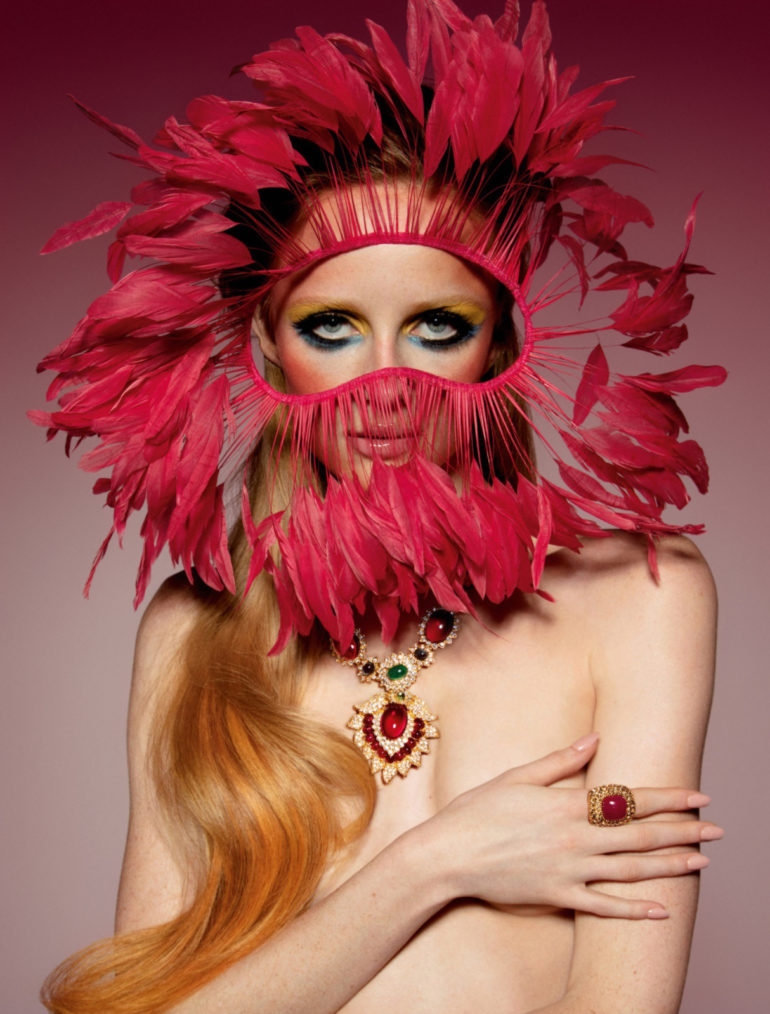 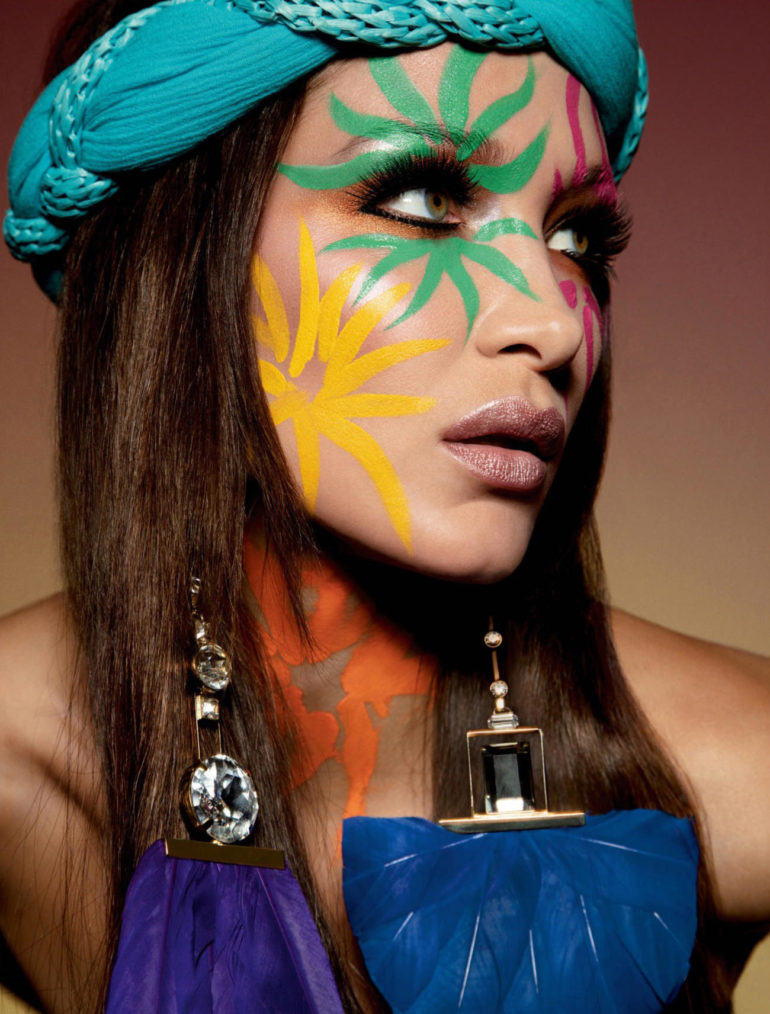 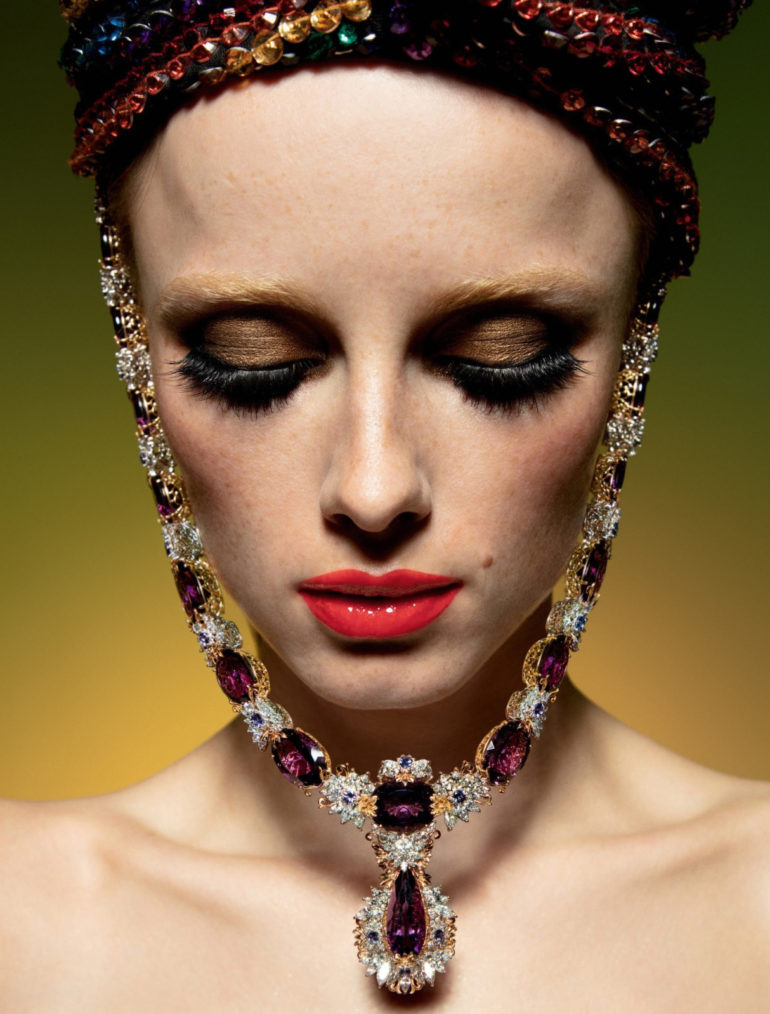 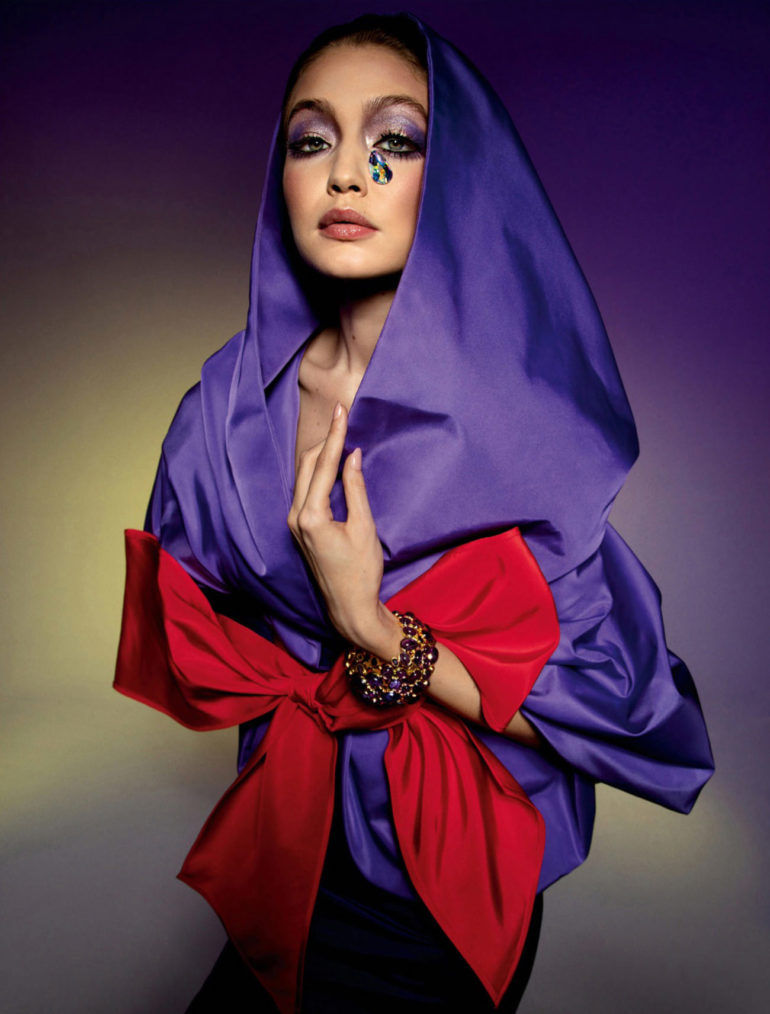 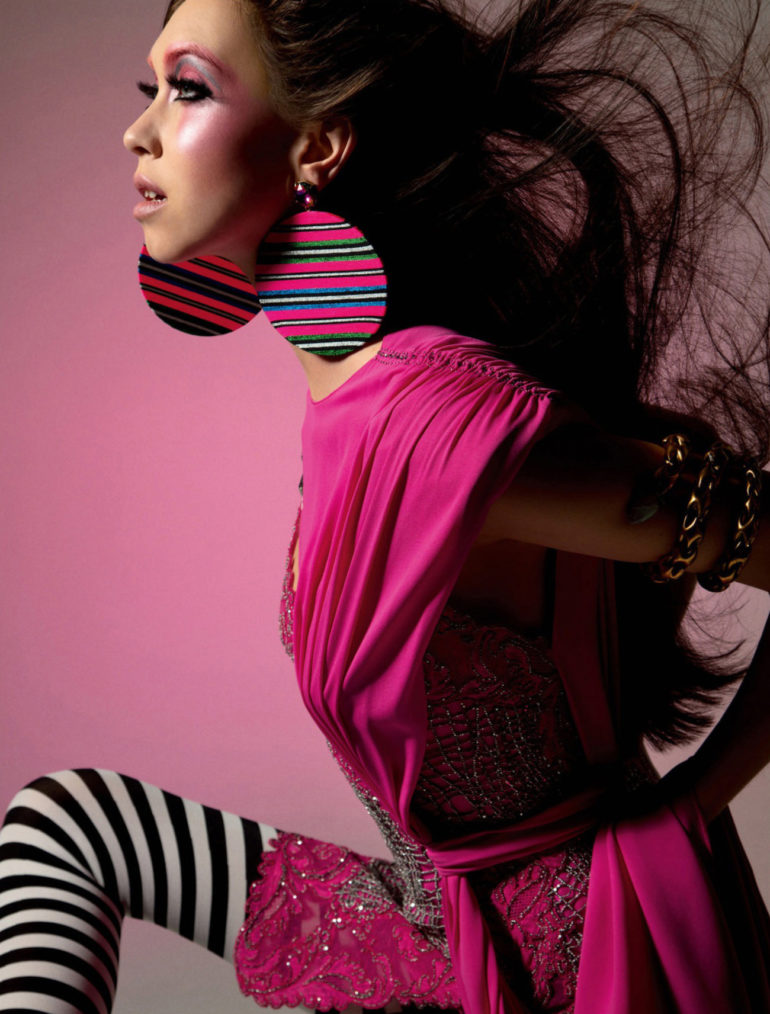 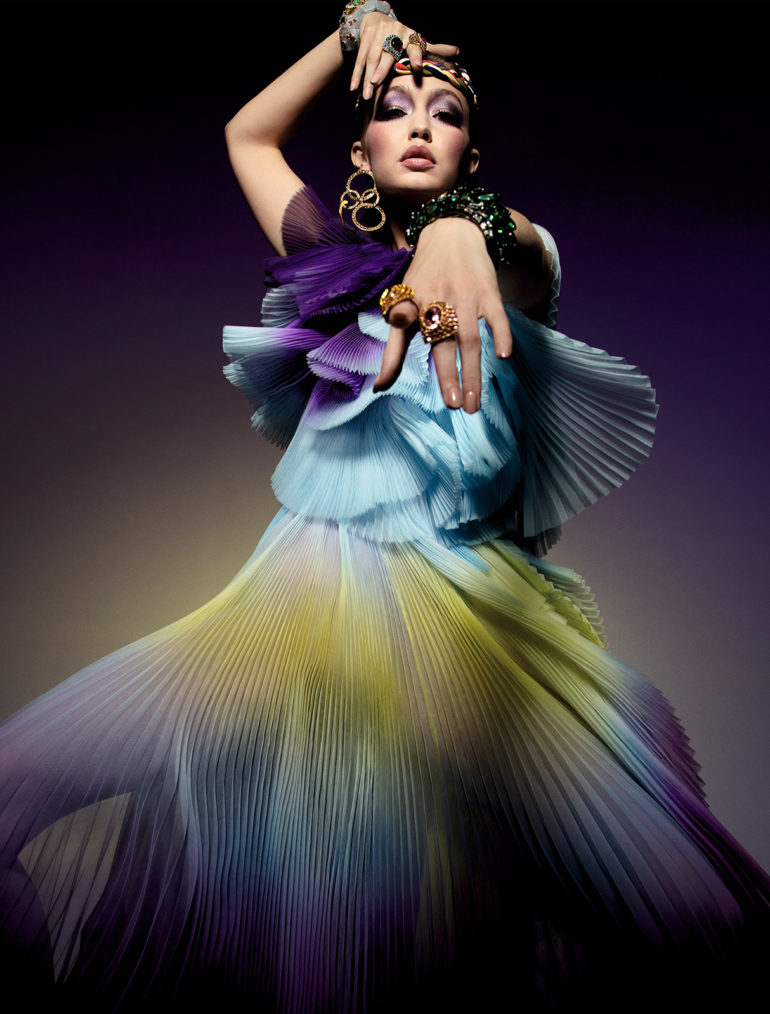 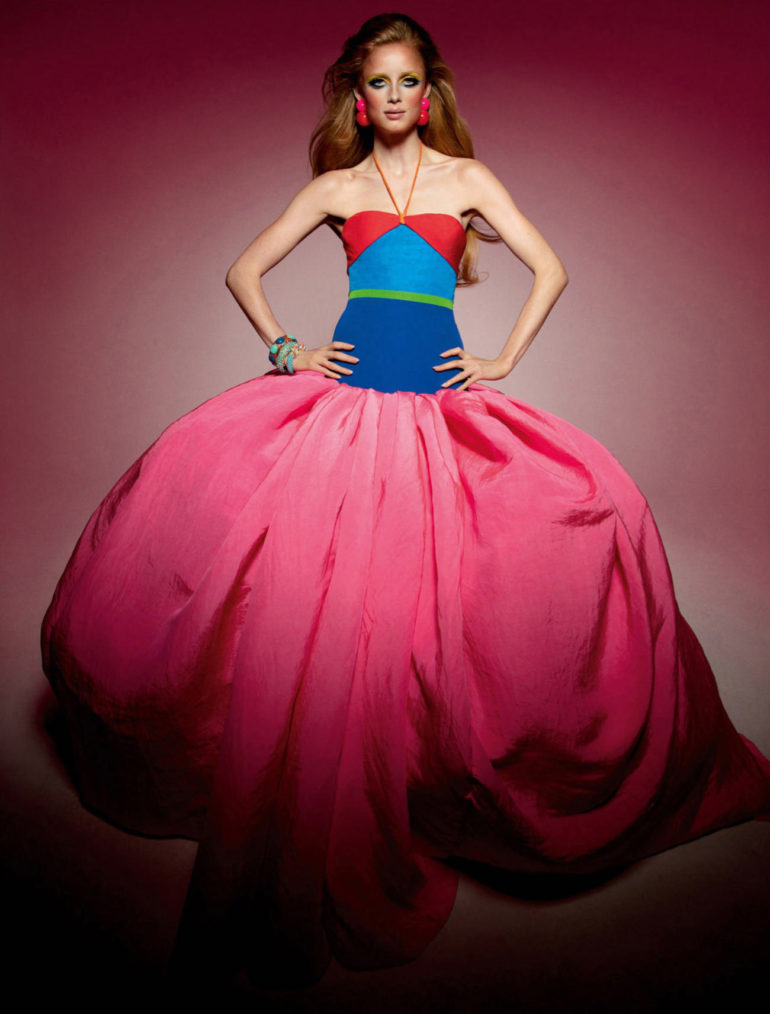 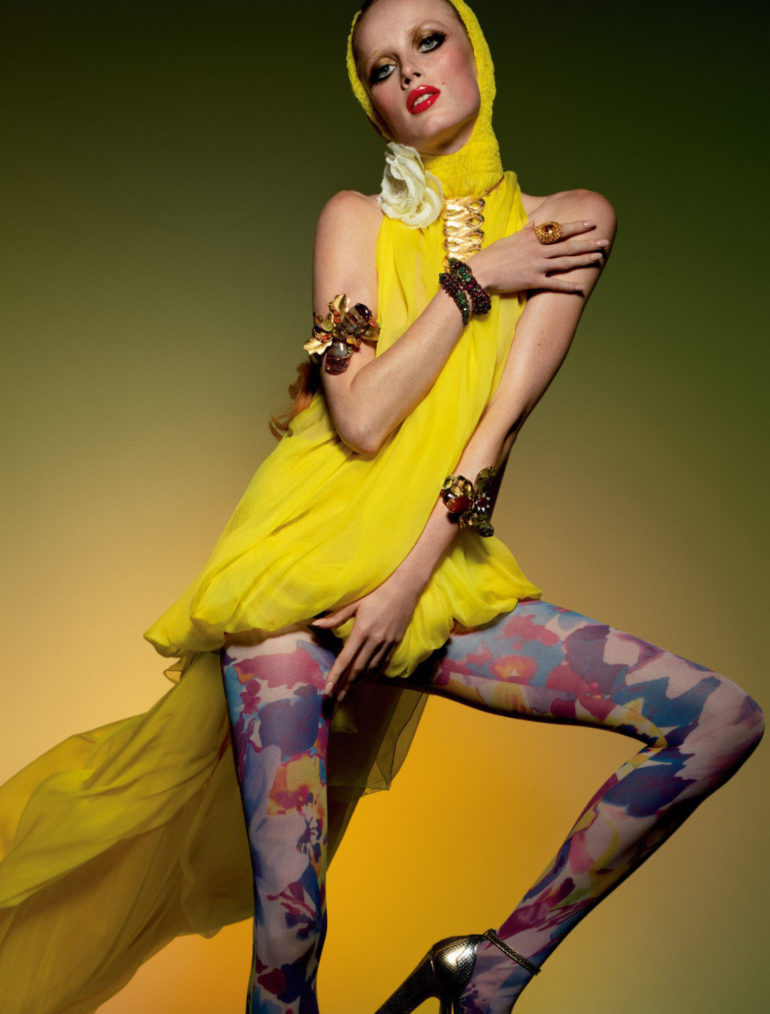 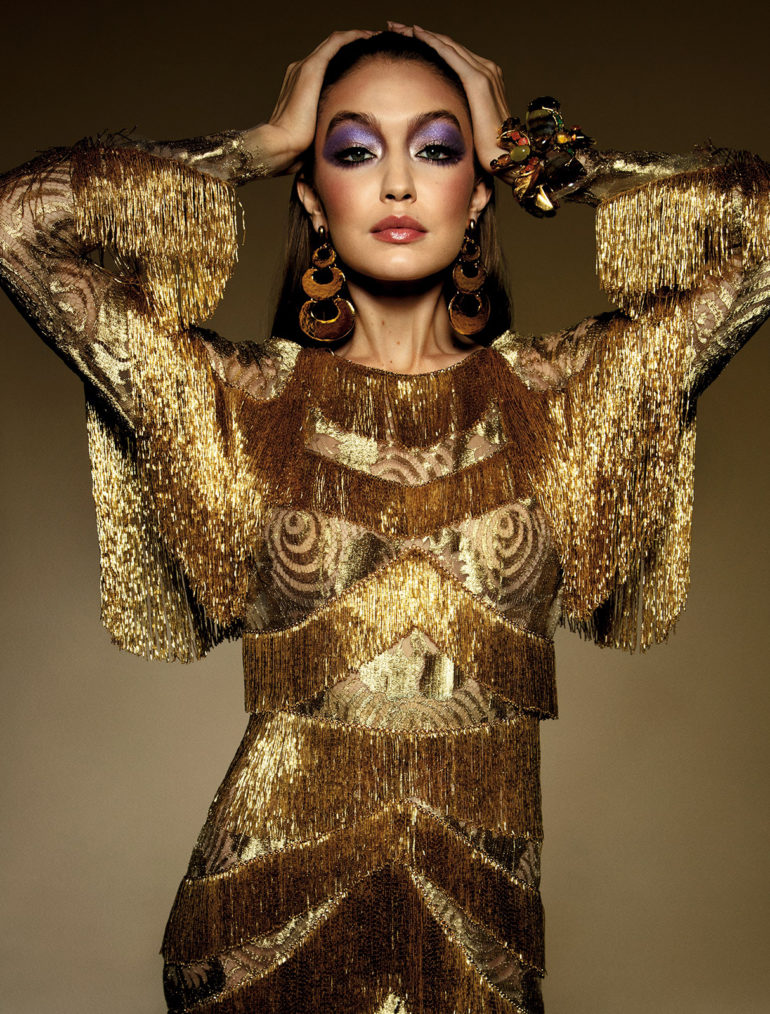 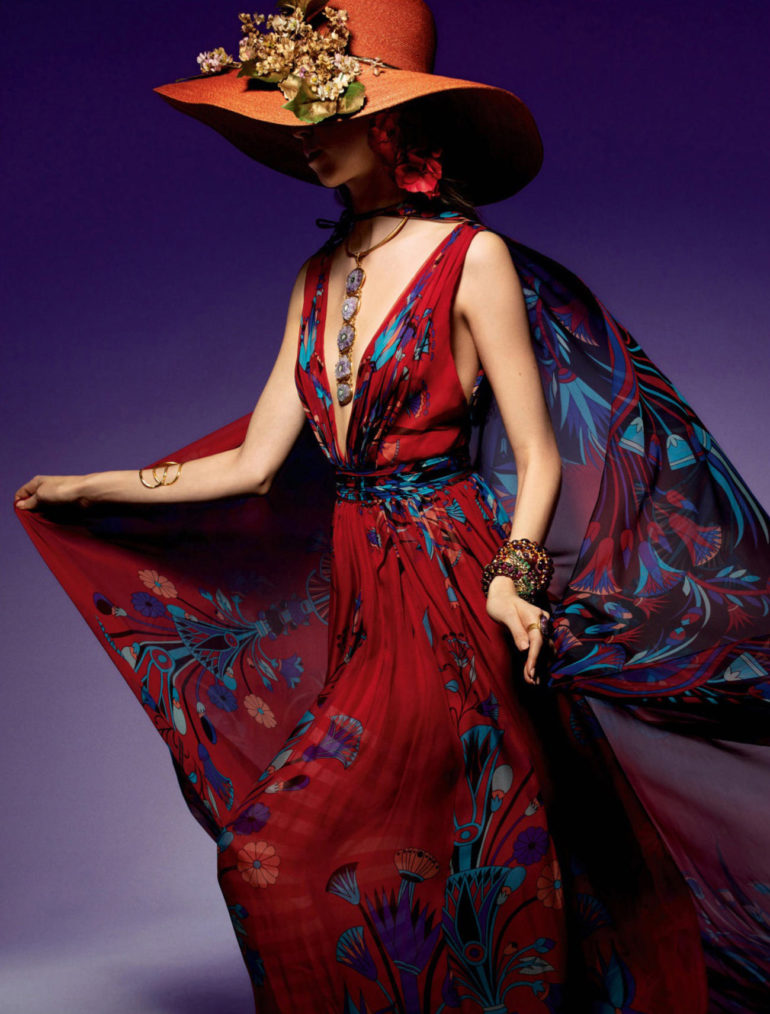 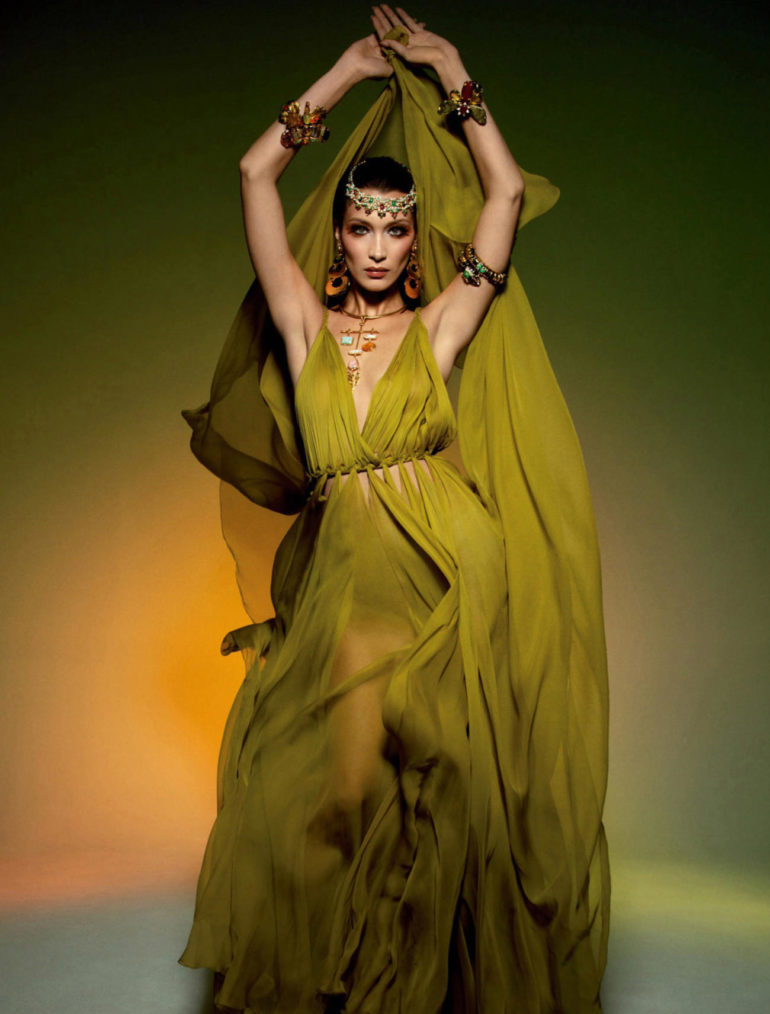 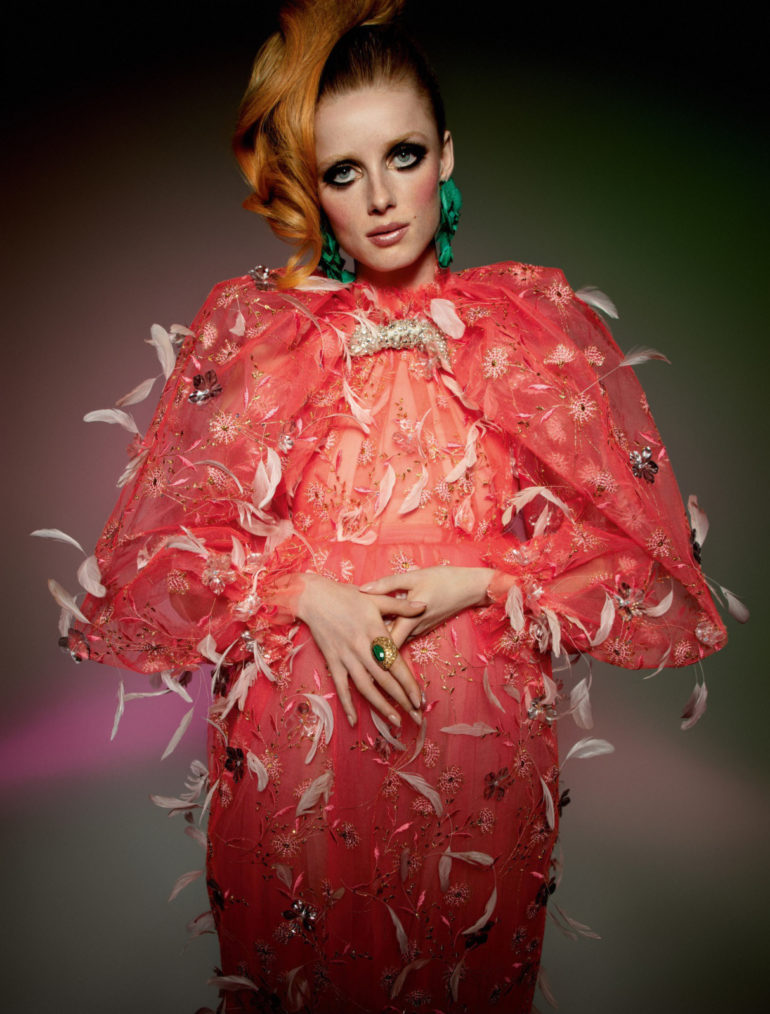 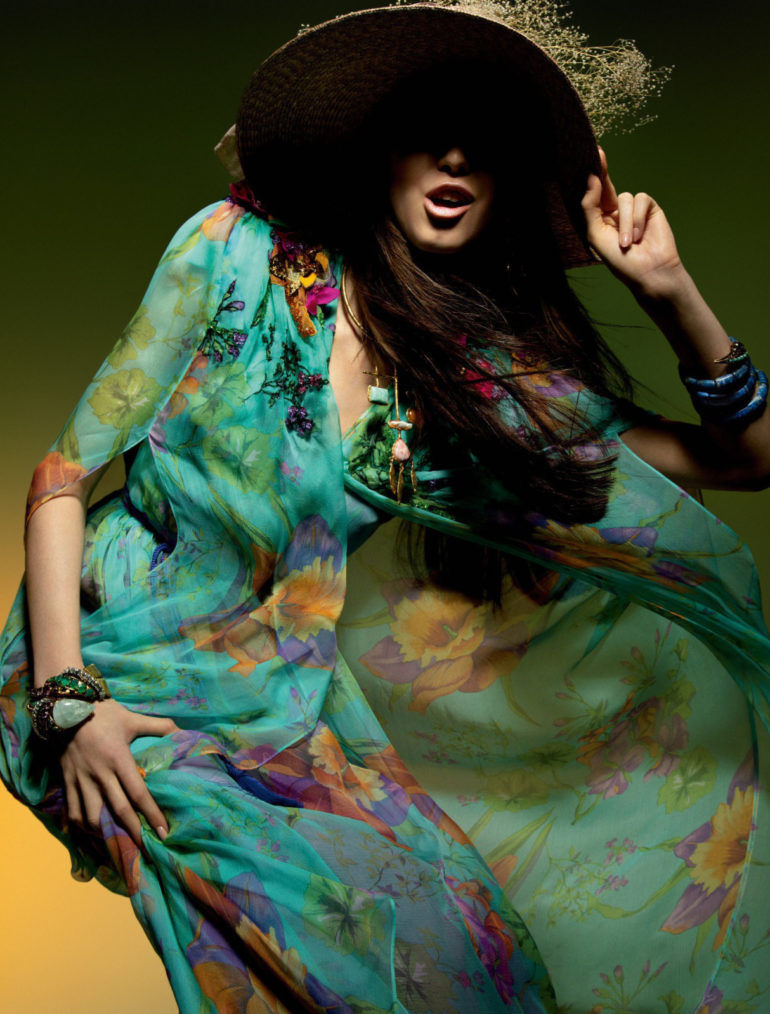 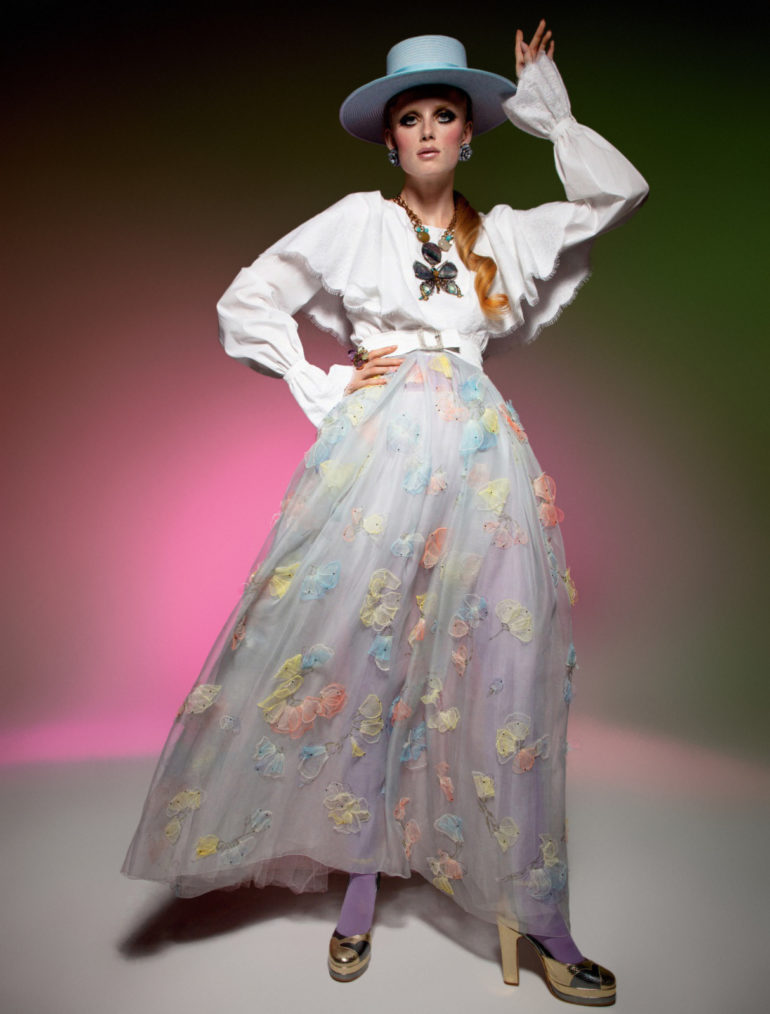 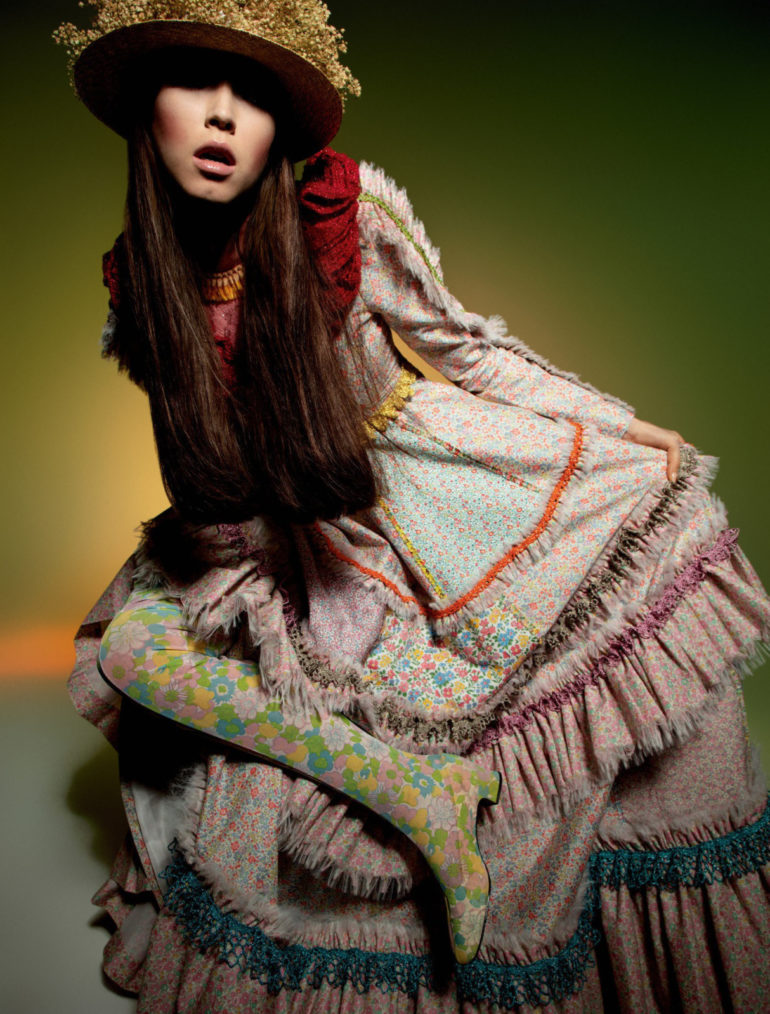 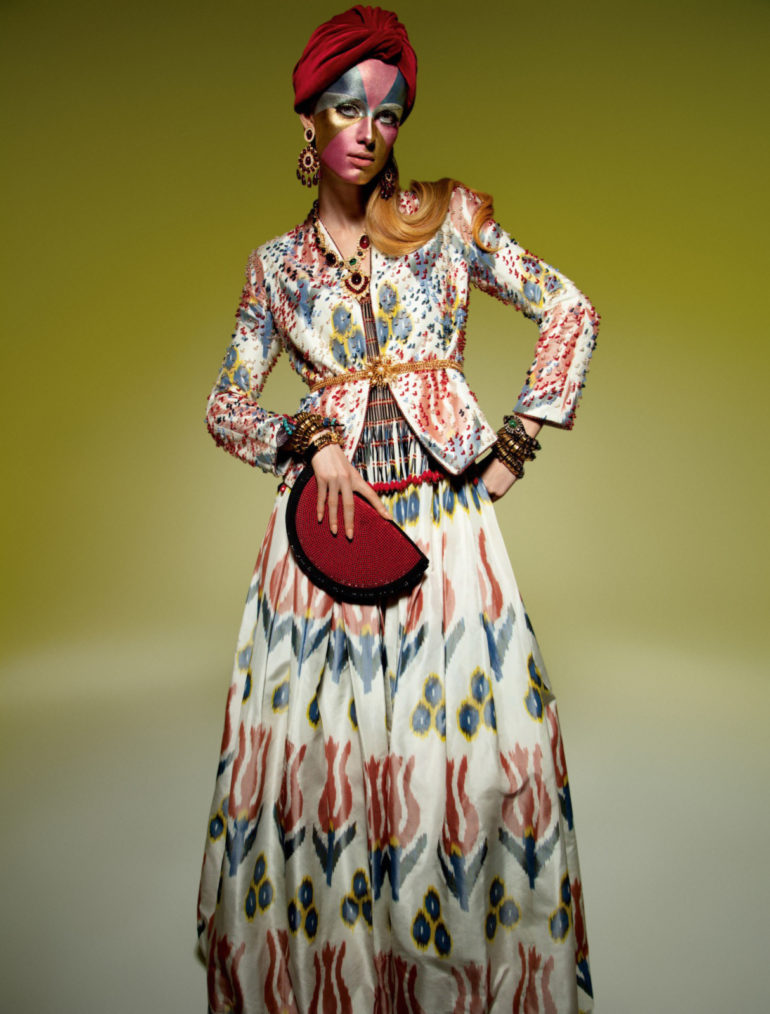 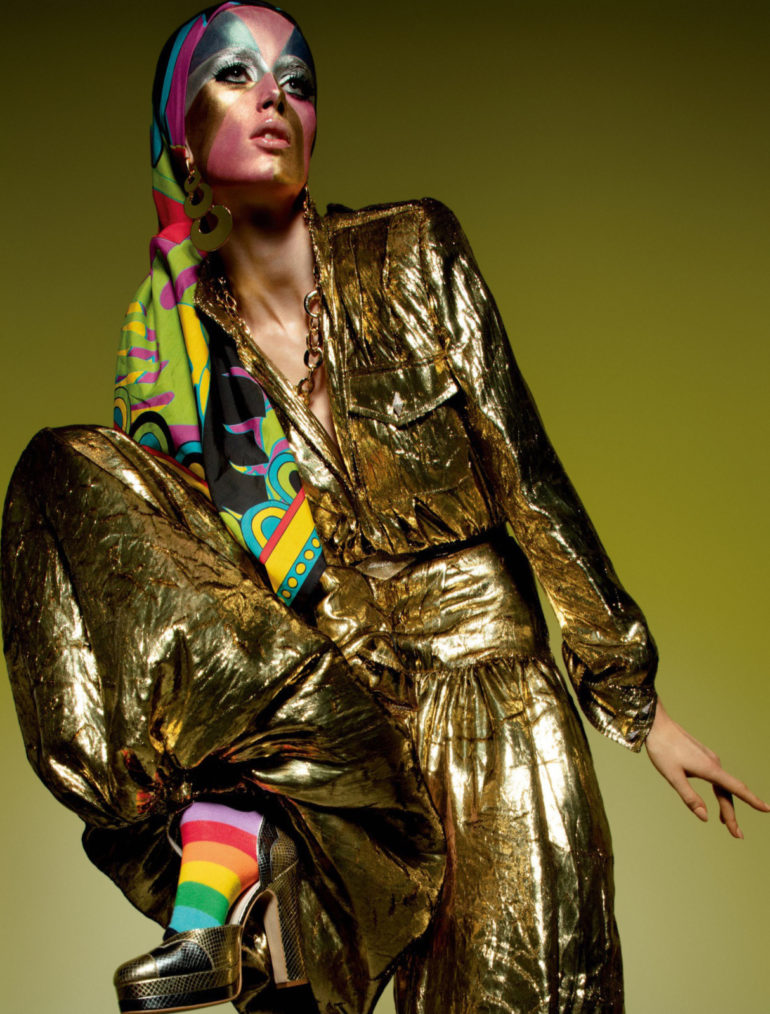 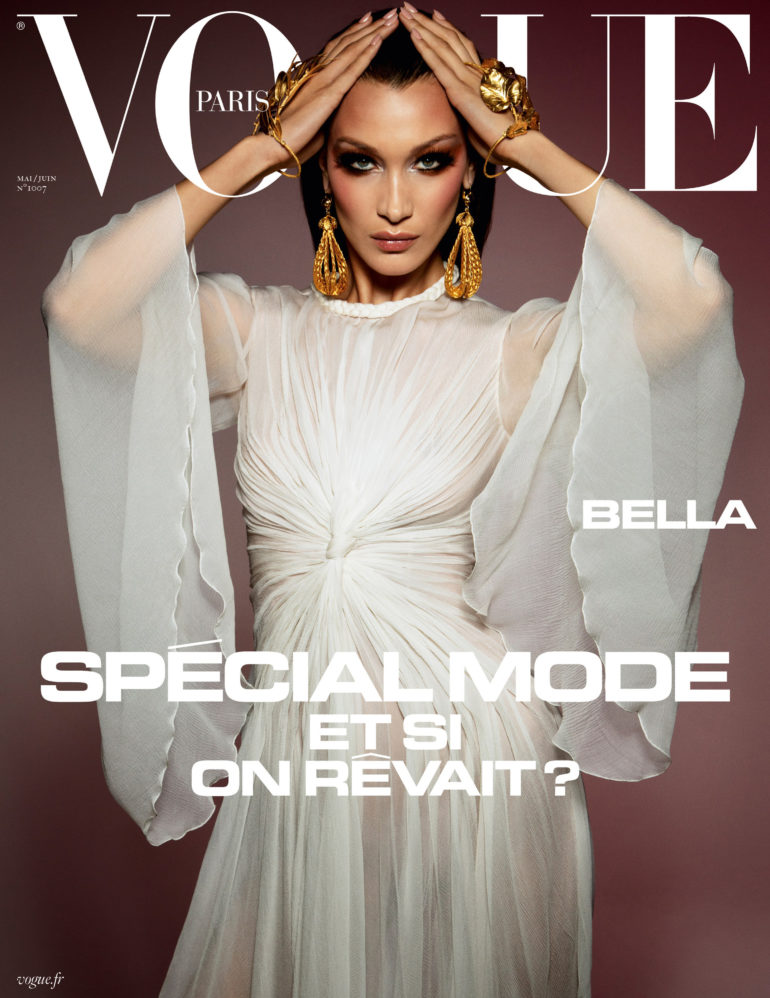 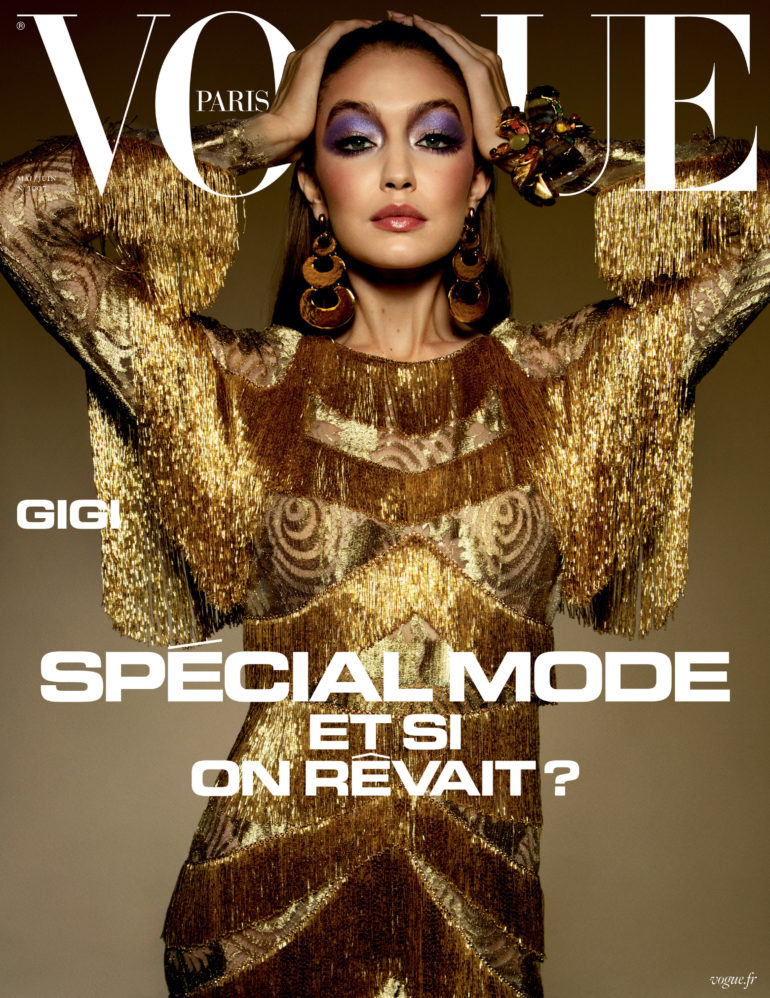